Access layers through the Layer Editor. The Layer Editor also houses the Layer menu, containing various layer tools. No matter which version of Sketchbook you're using, when you select a layer, it is highlighted in blue to indicate this is the current active layer. 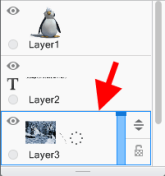 If you want to work without it displayed, tap

to hide the UI. Tap it again to display the UI.

Accessing layers when the UI is hidden

When working with the UI hidden, you can quickly access the Layer Editor using the trigger.

With one hand, tap

and drag down to select and hold Layer from the menu that appears. This will open the Layer Editor, which appears along the right of your screen.