Though Sketchbook is not a writing or typography app, text is an integral part of visual communication. Sketchbook includes simple text features to support the addition and of titles, comments, and captions to any image.

Text in Sketchbook Pro for desktop

Sketchbook Pro supports native and system fonts on Windows and MacOS. Sketchbook Pro also supports most downloadable font sets, including TrueType, OpenType or PostScript fonts. After installing new fonts to your hardware, restart Sketchbook Pro to view them in the font menu in the Text Editor.

Text can be added by tapping the Text icon in the toolbar.

Text Layers can be identified by a ‘T’ icon on the left side of the layer preview, which indicates that the text can be edited. Standard features such as Quick Transform, layer visibility, layer opacity and blend modes can be applied to Text Layers. 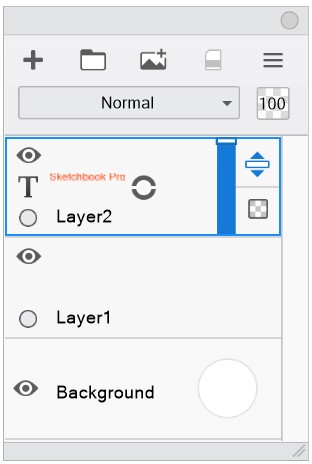 To edit an existing Text Layer, tap on the Text Layer marking menu

and select the South-East gesture to Edit Text Layer. 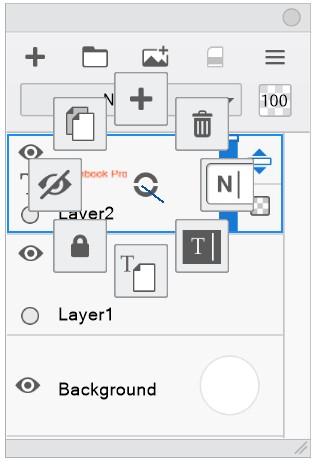 Visibility and layer opacity of the Text Layer can be adjusted the same as other layer.

Brush strokes and other image features cannot be applied to a Text Layer until it is rasterized to a regular, paintable layer.

. Once a layer is rasterized, the text is baked and is no longer editable.

Once you've created text with the Text tool, you are in Transform mode. Text can be moved, scaled, rotated, flipped, even distorted with the Transform Puck. 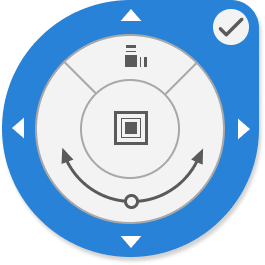 Since your text is pixels and not rasterized, you can make changes to it without affecting the quality of the image. However, you can change text into pixels (rasterize), using

, so you can manipulate it like a paint layer. Try using Distort.

When text is rasterized,

Edit Text can no longer be applied.

If you want to change the text, be it a spelling mistake, to change the font, font size, make something bold, italicized, or underlined, or to change the color, use the Edit Text Layer window. 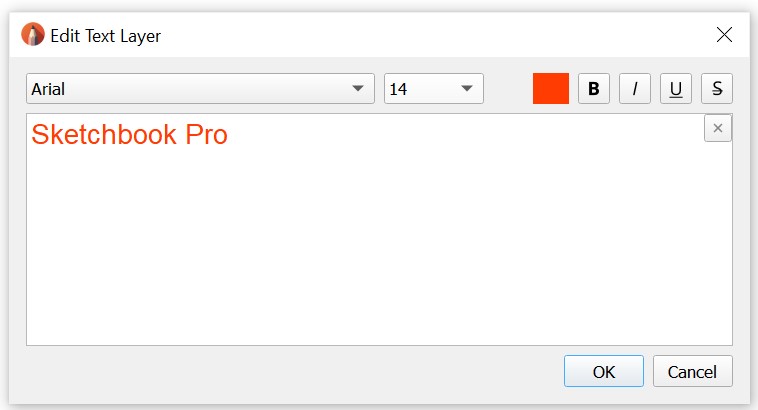 Using text in Sketchbook for Android and iOS

Sketchbook by default uses the system fonts on Android and iOS. You can unlock the ability to add additional fonts with the Premium Bundle (available on iOS, coming soon for Android).

The Text Tool allows applying text to any active layer.

To add text, select the Text Tool from the toolbar.

On mobile phones, it will be nested under the tools icon. 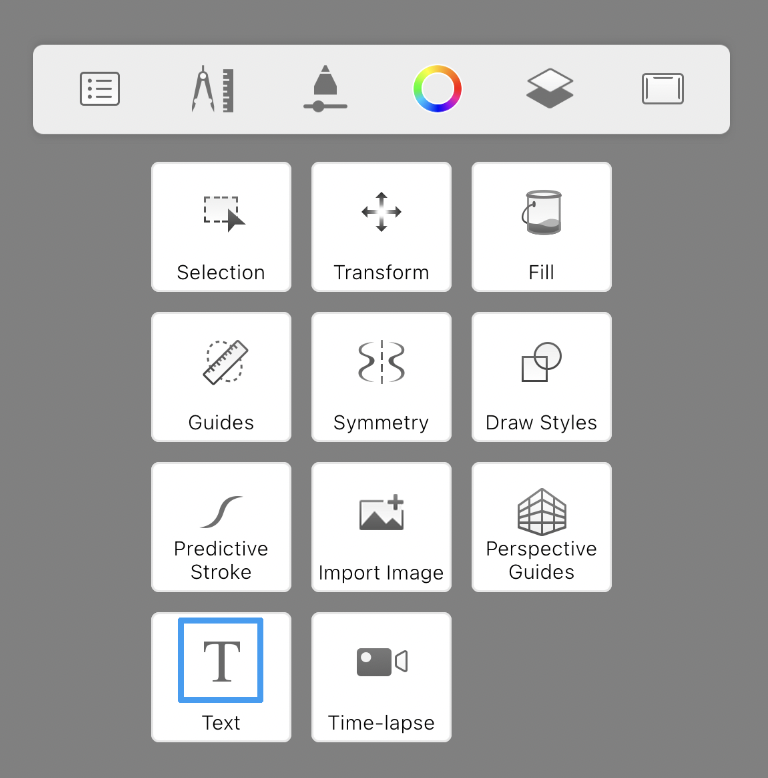 Before creating text, it is a good idea to make sure the area where text is to be placed is visible.

The Text Tool presents a text toolbar for text entry, text settings and positioning. Tap on these tools to make all your edits, using two-finger gestures to move, scale and rotate.

When complete, tapping the checkmark will apply the final text to the active layer.

If additional non-system fonts have been installed to an iOS device, these can be added to the Sketchbook font list with the Premium Bundle.

You'll first have to have added the fonts to your device. See information from Apple on how to do that here.

To add fonts, tap on the + icon in the top right of the window. This will open a new dialog to search and select the fonts you wish to add. 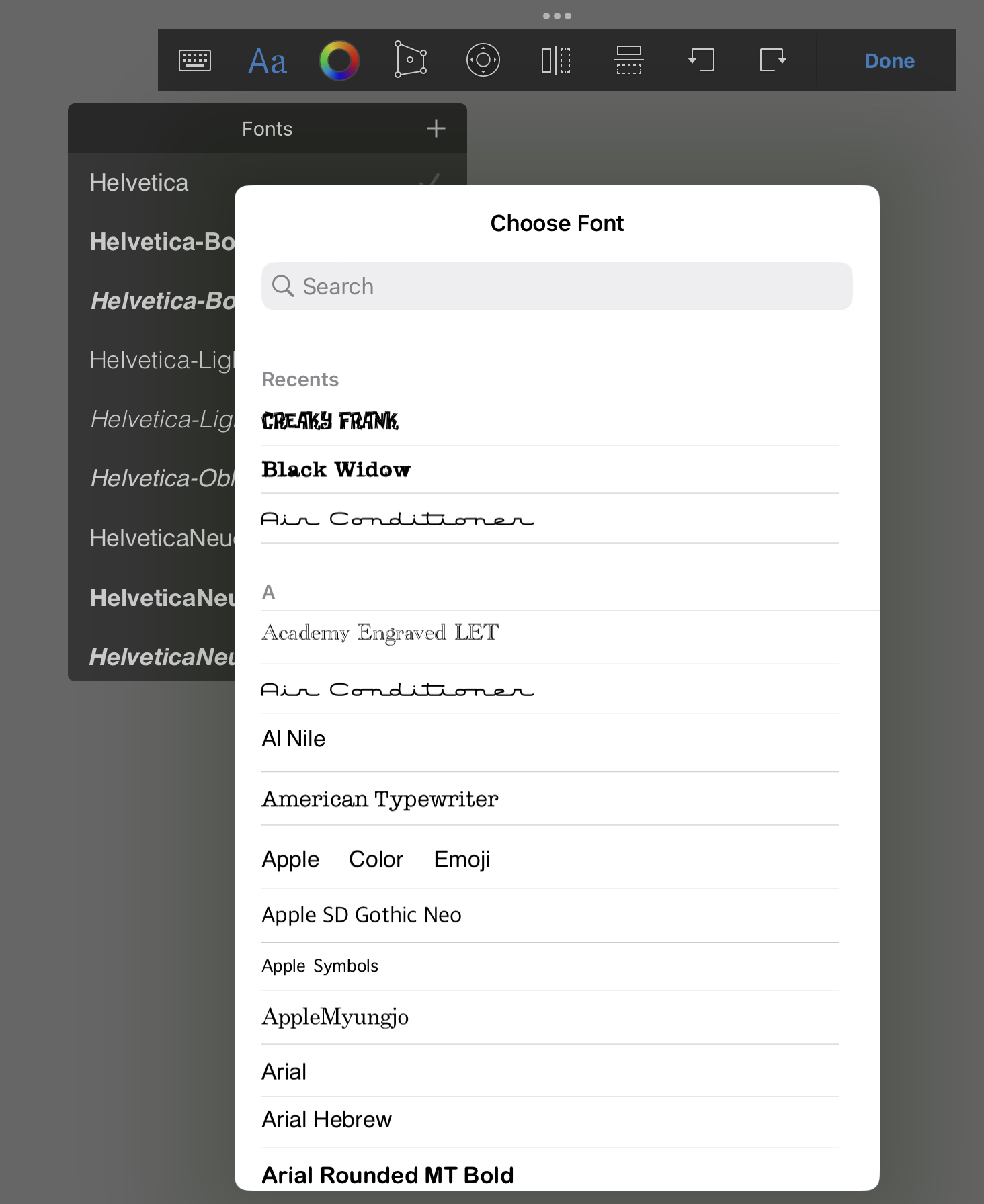