Want to create either a striking or subtle effect? Change layer opacity. How about creating a reflection? Duplicate‍ the layer, flip the image, reposition it, then change the transparency of the layer. Change opacity to fade the content on a layer.

When dealing with sheer cloth, such as drapes, change the layer transparency. It will determine how see-through the fabric will appear.

When you change layer opacity, you affect its transparency. This is really useful when using a background image as reference for a line drawing. If you select the reference image layer, drag its slider down to reduce opacity. Now, return to your line layer and continue drawing. This is a great workflow for beginners. As you practice drawing the same thing, you get used to the form, proportions, and build muscle memory. 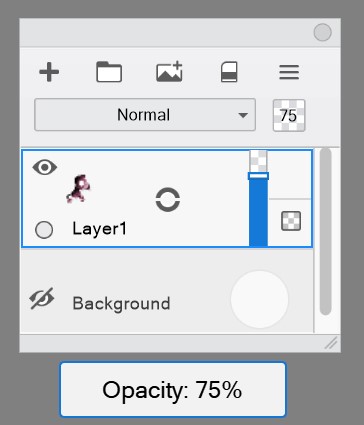 You can either drag the slider up and down to the desired opacity level, or enter a percentage in the box. 100 will be 100% opaque, and 0 will be fully transparent.