Jump to Android, iOS or Windows 10

Do you have a grid, templates, reference image, want to trace something, or something else you'd like to add to Sketchbook? If so, import the image. Once imported, lock the layer, add layers, and build up your sketch. You can import as many images as you have available layers and your device will support.

Importing in Sketchbook Pro for desktop

To import sketches of various formats:

In your Sketchbook Pro preferences, the is an Import Image option. By default, when you add an image, a layer is automatically created and the image is added to it. This is super handy. But, what if you’ve been drawing on a layer and you import an image? Well, without Add Image: Import into a new layer enabled, the image could cover what you drew. This is why we created this option and it is enabled by default. However, if you prefer for a layer not be be created, say because you have a limited number of layers available, then disable this option.

Importing in Sketchbook for Android

Import Image takes an image from your camera or device and adds it to a new layer, above the last. 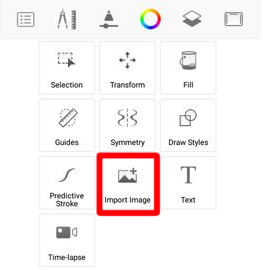 Importing on Android for tablet users

Importing on Android from the Gallery

Importing in Sketchbook for iOS

Import an image as a new canvas

Import from the Gallery

Import an image into an existing canvas

Use the Import tools to rotate, position, flip, and scale your imported image.

Importing in Sketchbook for Windows 10

Wondering how to add an image into Sketchbook? What about what types of files are supported? Well, there are two ways. You can use Open or Add Image.

How to open a sketch

What kind of files can you open? TIFF, JPEG, png, PSD, BMP, and GIF.

How to use Add Image

You can import JPEG and png files into this version of Sketchbook.

INFORMATION: Use Transform‍ to help with placing and resizing your image.