When editing text in Sketchbook, you start with entering the text editing mode. This will enable making edits to the actual text, such as adding a word or fixing the spelling of something. You can also change the font and color.

Each version of Sketchbook has slightly different tools for editing text. Some are more robust than others. Don't forget, if you are using a version that lacks some of the text functionality, you can always export your work and import it into a version with the functionality you need.

How to change the transparency of text 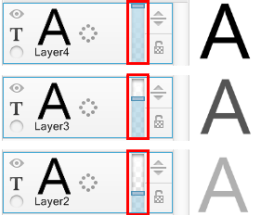 How to transform text

Once you've created your text, use the various text editing tools to make it just right.

Use the Font button in the Edit Text Layer window to access the following text editing tools:

Changing the transparency of text

In the Layer Editor, tap-drag the slider (seen below) to increase or decrease layer opacity.

Since your text is pixels and not rasterized, you can make changes to it without affecting the quality of the image. However, you can change text into paint, using

, so you can manipulate it like a paint layer. Try using Distort.

When text is rasterized,

Edit Text can no longer be applied.

If you want to change the text, be it a spelling mistake, to change the font, font size, make something bold, italicized, or underlined, or to change the color, use the Edit Text Layer window. 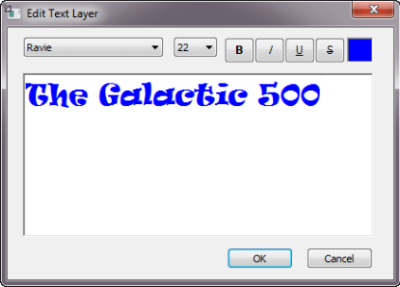 ALERT: Though the design of your interface may differ depending on the version of Sketchbook you're using, the functionality is the same.

Do all your text edits while in the tool. The text created is a paint layer (like what happens to text in the desktop version, once you apply Rasterize Text Layer.

Editing text in Sketchbook for Windows 10

ALERT: Sketchbook for Windows 10 doesn't currently have a Text tool